How Much Data Do You Really Need?

Data is the fuel of our smartphone dependence, enabling the streaming, scrolling, and surfing we do each day. And thanks to cutthroat competition among wireless carriers, more Americans are scoring deals on unlimited data plans.

The appeal of these plans is undeniable: Knowing that you’ll never exhaust your allotted data provides peace of mind. But in financial terms, are they a worthwhile investment? Do users typically burn through enough data to justify their monthly bills?

The same question could be asked of capped data plans. Are customers paying for the amount they actually need, or do they end up with a ton of data left over?

We asked 1,000 Americans about their data plans and usage patterns, studying whether they paid too much every month. Our findings suggest that a striking percentage of customers are buying data they’ll never need – and wasting hundreds of dollars a year as a result. Could you be one of them? Take a look at our results and decide for yourself. 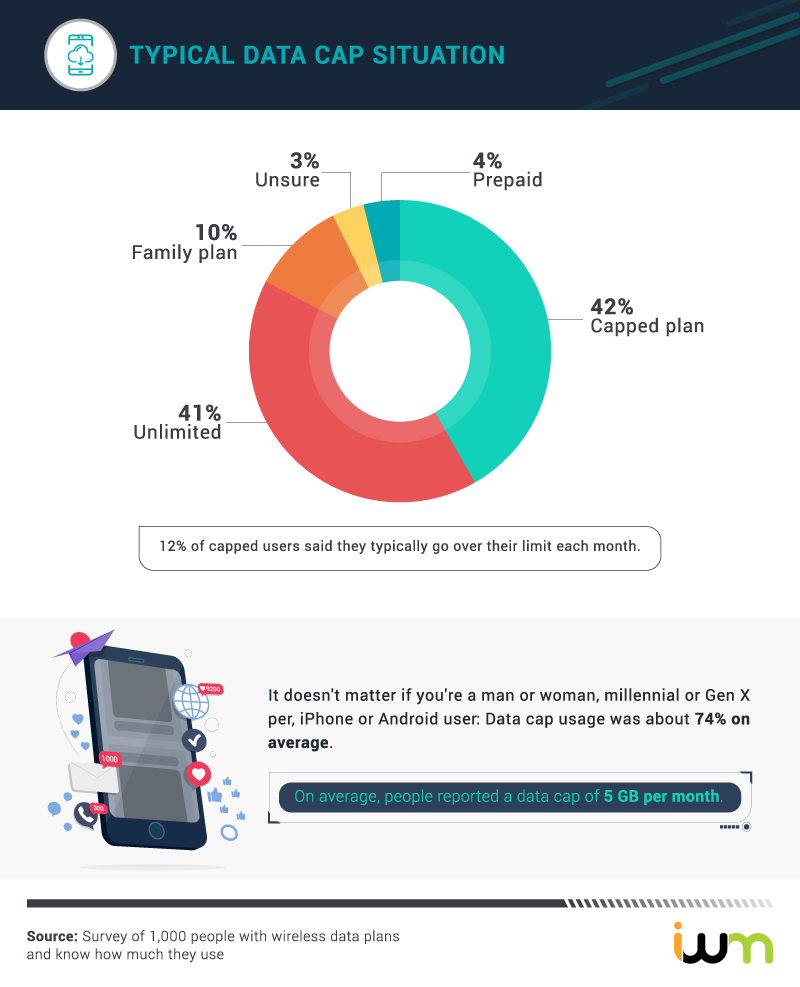 Among our respondents, unlimited and capped plans were about equally common, together accounting for over 80% of users. The remaining individuals used prepaid or family data plans or were unsure about the structure of their current wireless agreements.

In the context of this discussion, it’s worth noting that plans in the same category can vary enormously: “Unlimited” can entail any number of caveats depending on one’s contract and carrier. Likewise, data caps can differ significantly, although respondents with capped plans had 5 gigabytes of data each month on average.

However much data capped plans entail, though, our results suggest that users consistently underutilize their allotted amount. According to our findings, the average person with a capped plan utilized only about three-quarters of the data they paid for each month.

Interestingly, rates of data utilization did not differ much across demographics: Age and gender had little influence on the percentage of available data that users consumed. This finding does not suggest equivalent patterns of total data consumption, as smartphone usage varies substantially among different segments of the American public. Rather, these results indicate that Americans from all walks of life are paying for more data than they truly need.

In terms of dollars and cents, how costly is unused data? Among our respondents, the average cost of a capped plan was just over $61. If over a quarter of that value goes unused on average, then the typical capped customer spends almost $200 a year on unutilized data. If that amount seems modest, consider other luxuries you could afford with that cash, such as the yearly cost of a premium streaming service.

iPhone users were particularly likely to spend big on unused data, wasting $51 more each year than their Android-using counterparts. This result could reflect the financial means of each mobile platform’s following. iPhones are typically more expensive than Android devices, meaning their users might also be able to afford expensive data plans they won’t necessarily need

These statistics suggest that unlimited plans are ideal for power users, who take full advantage of their inexhaustible contracts. But as our next set of findings show, those with more moderate data habits frequently fall for them as well. 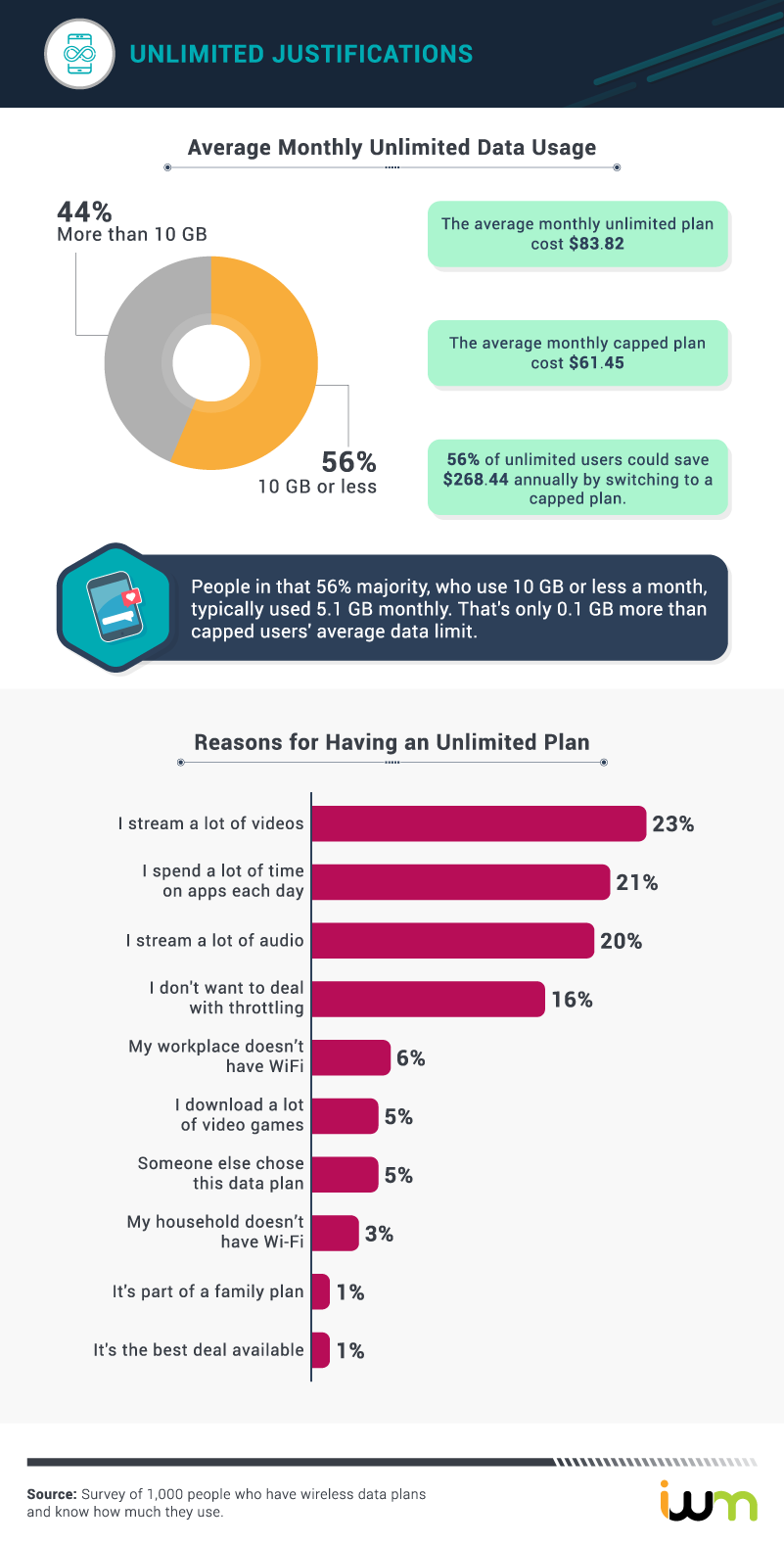 Many unlimited plan customers make full use of the privilege they pay for: 44% of respondents with unlimited plans consumed over 10 gigabytes of data each month. But that still leaves a majority of unlimited plan users consuming less than 10 gigabytes monthly. This group could switch to a capped data plan without running out – and save an average of $268.44 a year in the process.

More striking still, among unlimited users who consumed less than 10 gigabytes per month, the average amount of data used each month was 5.1 gigabytes. That’s nearly identical to the amount of data that capped plan users consumed on average. Clearly, not all unlimited plan customers select their contracts by accurately assessing their actual data needs.

So why did most unlimited plan customers choose their contracts? Among our respondents, the most common justifications concerned content: Around 1 in 5 said they stream videos or audio often or use apps throughout the day. Another 16% said they didn’t want to deal with data throttling. Unfortunately, many carriers will still slow down unlimited customers’ internet speeds if they use large quantities of data – making the term “unlimited” far from literal. 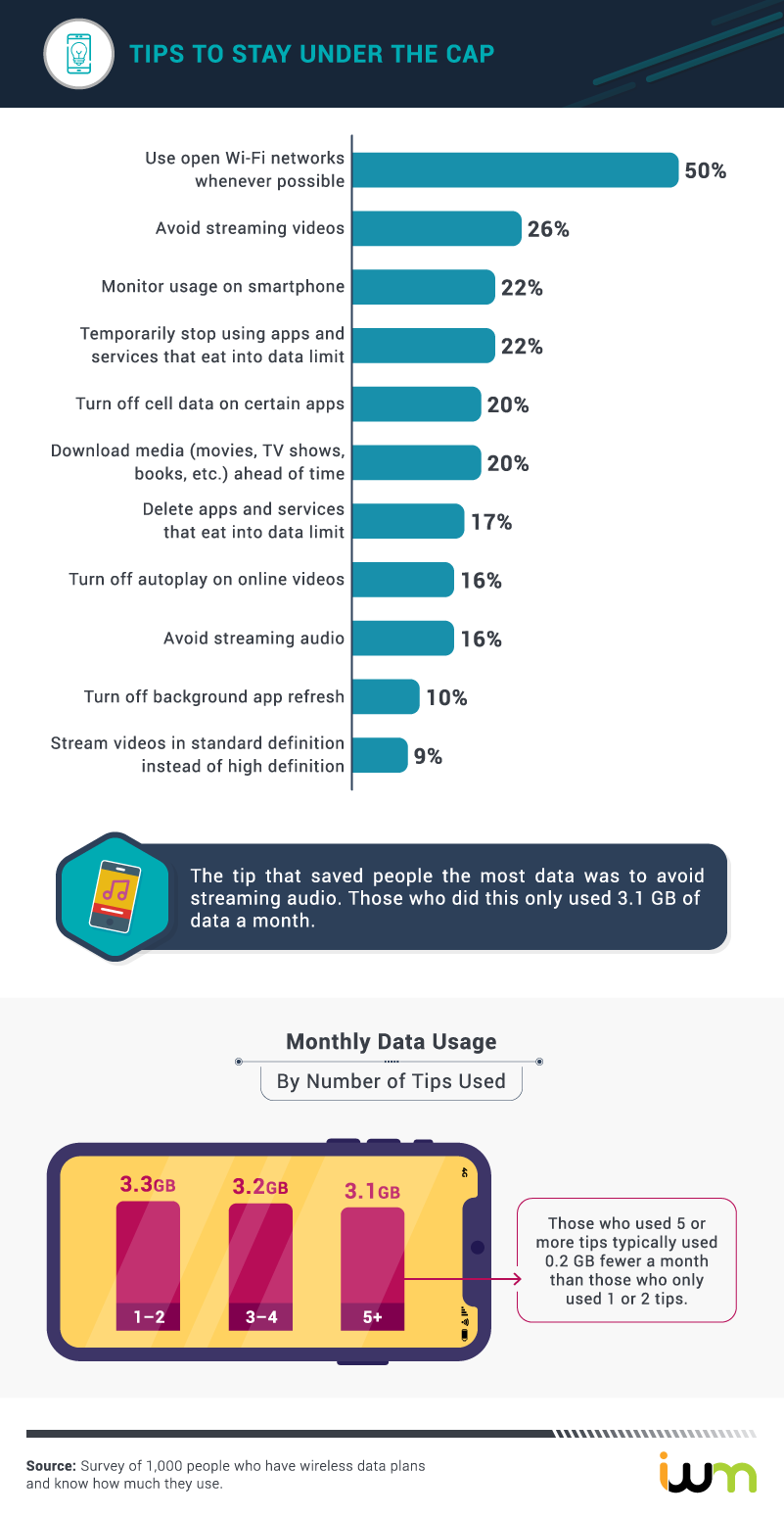 If you’re contemplating a switch to a more modest data plan, how can you be sure you won’t exceed your new limits? We asked our respondents which methods they used to avoid excess data consumption, identifying the most popular techniques.

Fifty percent said they use open Wi-Fi networks whenever possible to reduce data usage. While this strategy can be effective, be wary of the security threats that public networks pose and protect yourself accordingly. Another popular strategy was to avoid streaming videos: The majority of Americans have at least one streaming service, making this data-saving technique widely relevant.

Many users also took a more involved approach, monitoring data usage throughout the month on their smartphones. Doing so is relatively simple on most Apple and Android devices, and the same settings menu allows you to prohibit certain apps from eating up your data.

In terms of actual consumption, however, combining these data-saving techniques seemed to have little impact. Those who used five or more of these tips used 3.1 gigabytes on average, whereas respondents who employed only one or two used 3.3 gigabytes each month. Perhaps you only need a couple of good data habits to keep your usage largely in check.

Clearly, our findings indicate vast savings potential. Many Americans are spending big on unnecessary unlimited plans or leaving large quantities of data on the table. For some, reassessing their plans will be too much trouble: Not worrying about it is part of what they’re paying for.

But for motivated consumers willing to do the math, this project presents an opportunity to meaningfully reduce your monthly expenses. Grab your smartphone and see how much data you’re actually using. You may find that a more modest plan still offers all the data you desire.

At ItsWorthMore.com, we love savvy customers looking to get smart about saving. That’s why we buy used smartphones, tablets, and computers, helping sellers maximize the value of their current devices. We also sell refurbished gadgets, offering incredible value and a six-month guarantee. Once you get a great deal on the smartphone of your dreams, you’ll be ready to make the most of your monthly data.

To conduct this study, we surveyed 1,000 Americans on the Amazon Mechanical Turk platform. To qualify for the survey, respondents had to say that they knew how much data they typically use in a month, how much money they spend on their wireless bill each month, and what their data plan was like. An attention check was also included roughly halfway through the survey. Those who failed were disqualified and excluded from our results.

To determine how much money wireless providers make off unused data, we first referenced the total number of adults over 18 in the U.S. from the 2017 U.S. Census Bureau dataset. We used data from the Pew Research Center to see how many of those adults had a smartphone. We then used our data to see how many people with smartphones had capped data plans. We multiplied that number by the average amount of money wasted on unused data annually by individuals in our study.

This study is dependent on self-reported data. Some problems are associated with self-reported data, including but not limited to selective memory, telescoping, and exaggeration. Accordingly, we can’t guarantee how closely our results correspond to reality.

If you use less than 10 gigabytes of data each month and are on an unlimited plan, switching to a capped plan is a smart way to save. You want to know what else is smart? Sharing this article with your followers so that they can do the same. Just make sure that it’s for noncommercial purposes and that you link back to this page so your readers can see the full breadth of our research.