Binge-watching is reshaping our broader culture: In fact, the capacity to stream shows for hours on end has far-reaching implications. According to recent research, our streaming obsessions can impact our worldview, restructure romantic relationships, and shift the way our society tells stories.

If streaming plays a decisive role in modern life, how has it changed our specific expectations of TV? It’s true that millions of Americans still consume TV in its traditional format, waiting patiently for a new episode each week. If given a choice, however, how many of us would prefer to stream TV shows on our own schedule instead?

These questions promise to define TV’s future – and the advertising industry built around it. So we asked a diverse group of 979 respondents about their streaming choices, studying how they choose between standard broadcast formats and streaming platforms like Netflix, Hulu, and Amazon Prime. How do your streaming habits and preferences compare to theirs? Keep reading to find out.

Our results suggest that roughly a third of respondents watched shows exclusively on streaming platforms, a testament to the “cord cutting” trend accelerating across America. In recent years, cable providers have suffered significant losses, bleeding tens of thousands of customers each quarter. Similarly, 42% of respondents said they started watching a show on TV but shifted to streaming instead. 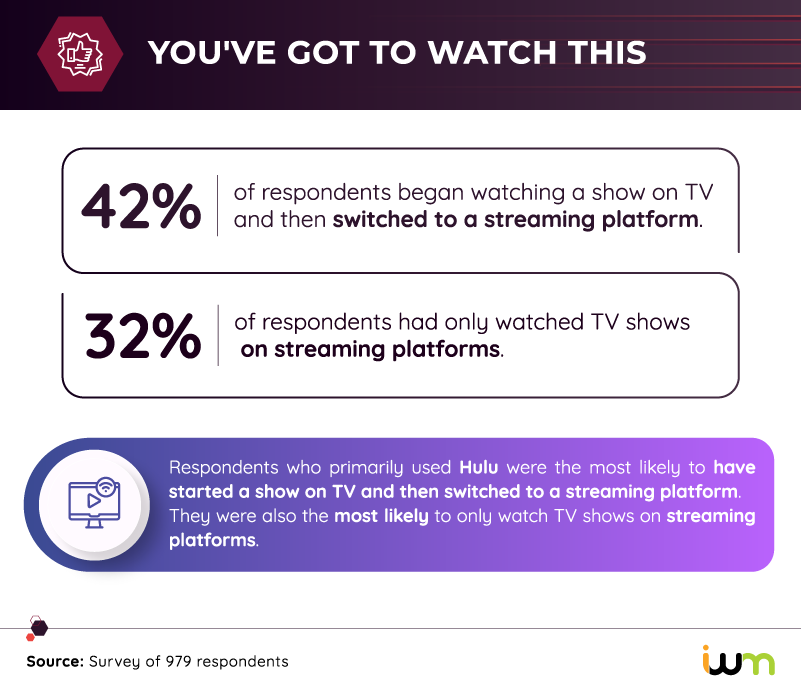 People who used Hulu as their primary streaming platform were the most likely to stream exclusively. They were also the most likely to start a show on TV but switch to streaming. These findings probably reflect Hulu’s distinct business model: Unlike Netflix and Amazon Prime, Hulu allows users to watch traditional network shows shortly after they’ve aired. Additionally, Hulu now offers a live TV service catering specifically to “cord cutters.” 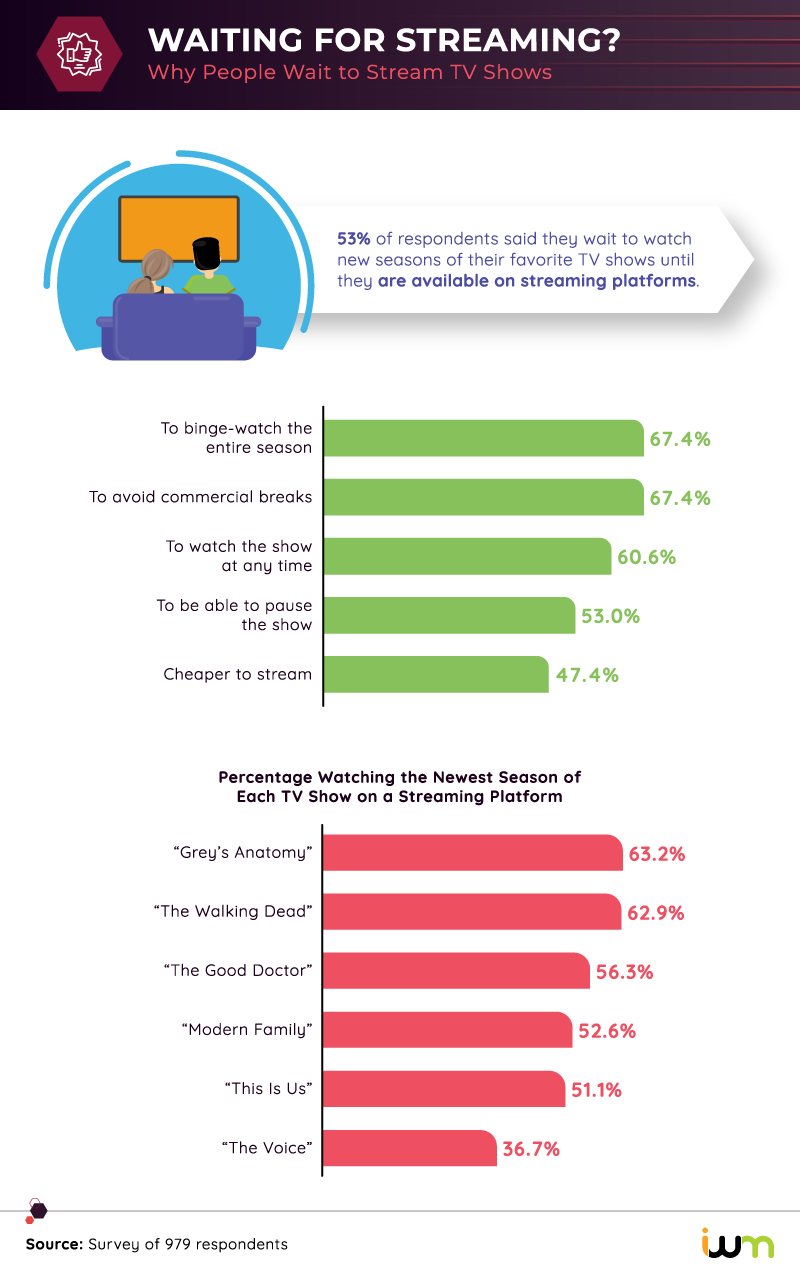 Interestingly, a majority of respondents said they were willing to wait for their favorite shows to appear on streaming platforms even if they could watch them sooner on traditional TV. Binge-watching was a top driver of this decision: Apparently, many find waiting between episodes unbearable. The desire to avoid commercials was another common reason to wait: Subscription-based services limit or eliminate advertisements in exchange for a fee.

TV advertising remains a lucrative business, with 30-second spots on popular network programs costing hundreds of thousands of dollars, on average. Still, while flagship programs like “Grey’s Anatomy” keep viewers hooked season after season, a significant portion of their audiences are shifting to streaming. 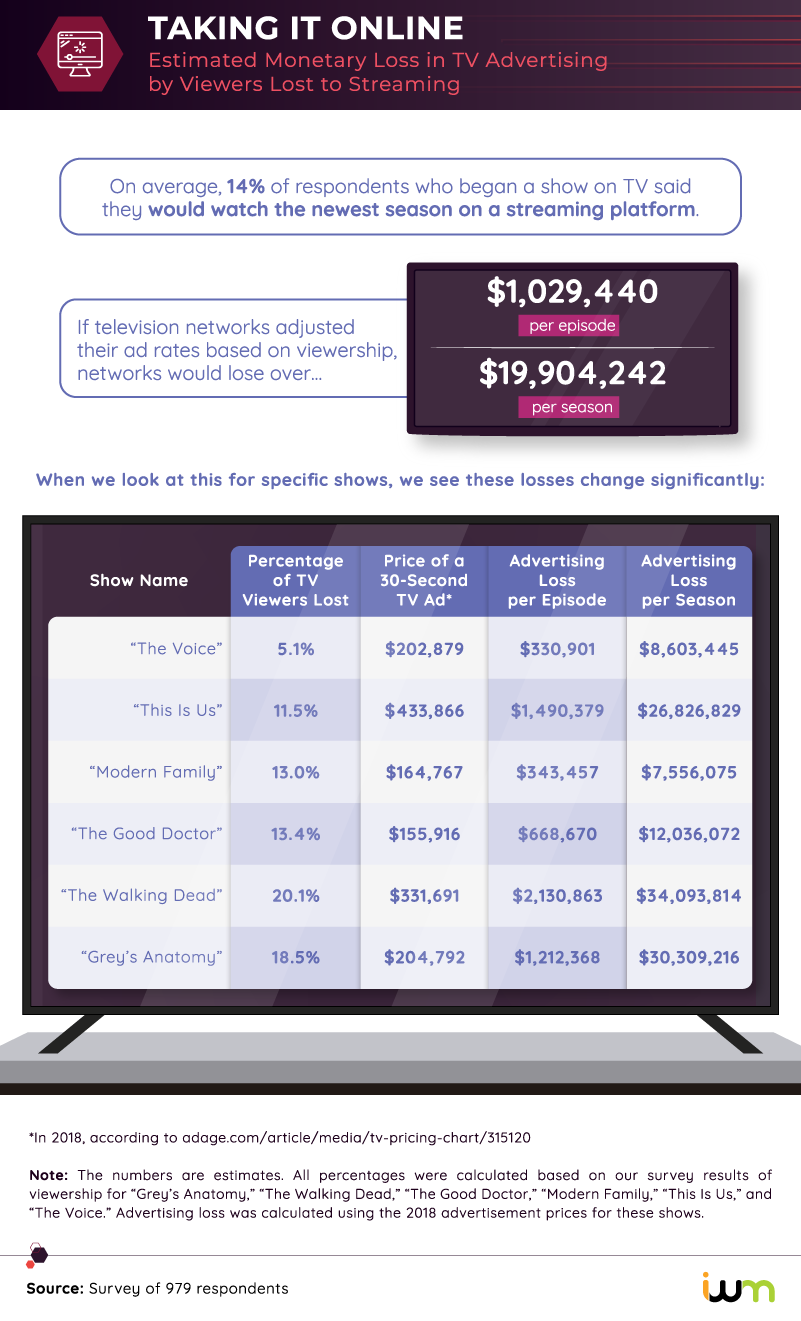 On average, 65% of respondents polled reported beginning  these top shows on TV, but 14% said they’d watch the newest season on a streaming platform, significantly reducing the reach of each TV commercial. If these shows’ TV audiences shrink by 14%, but ad prices remain steady, advertisers will waste roughly $19.9 million on average per season, according to our calculations.

Some shows are poised to see an especially large portion of viewers shift to streaming. For example, “The Walking Dead” is set to lose 20% of TV viewers to a streaming platform, and “Grey’s Anatomy” faces similar figures. These shows have been around for some time: “Grey’s Anatomy” first aired in 2005, while “The Walking Dead” is entering its 10th season. Accordingly, both shows have coincided with a massive shift in viewer behavior – one that seems likely to continue.

A Contrast in Quality?

Streaming giants have upended the TV industry with unprecedented spending: Analysts estimated Netflix’s 2019 new content budget to be approximately $15 billion. According to many of our respondents, all that cash translates to better content. In fact, 1 in 4 viewers preferred shows produced by streaming platforms to TV networks. 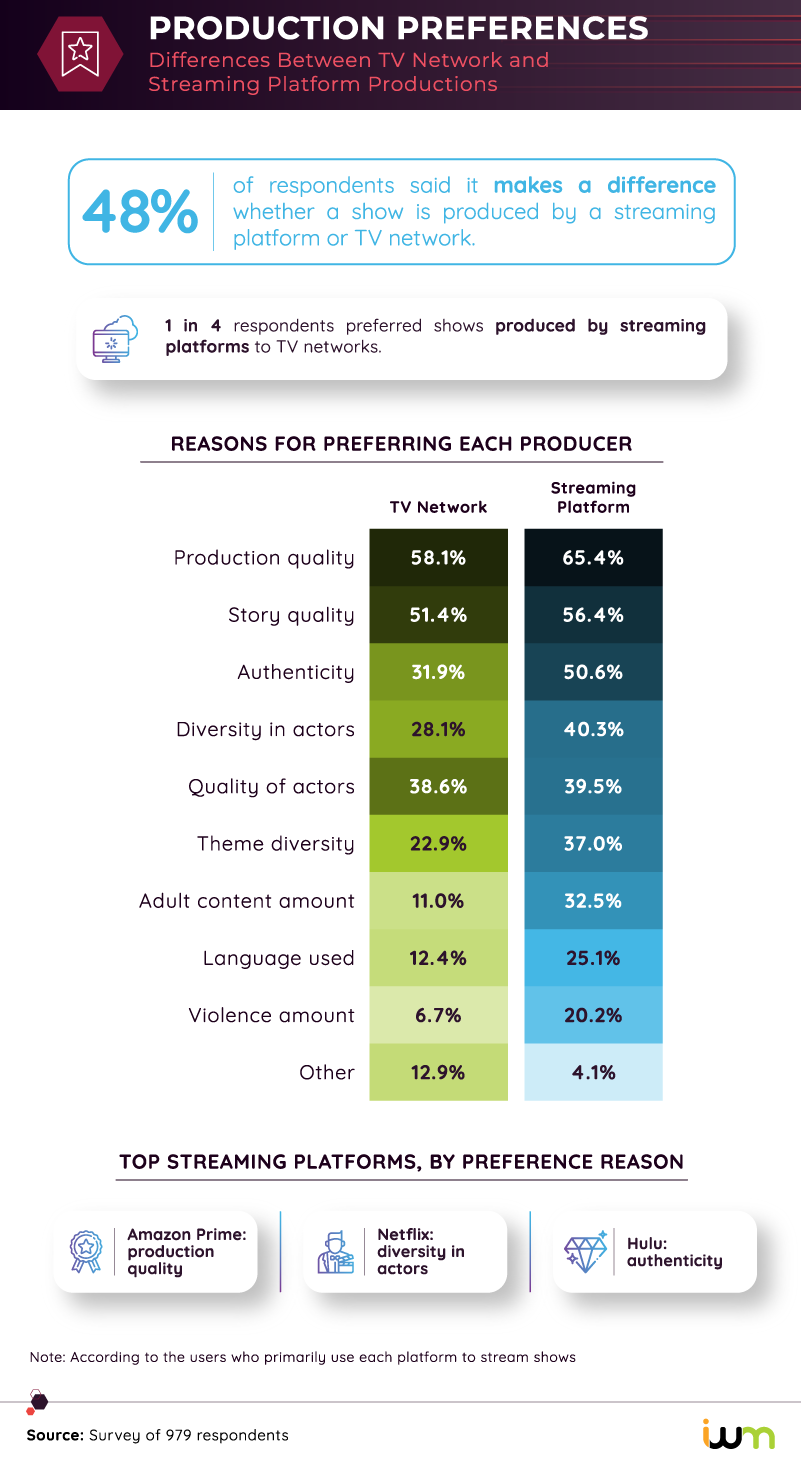 Within this camp, almost two-thirds said they felt streaming platforms offered higher production quality. Amazon Prime users were most likely to cite this reason, and award darlings such as “The Marvelous Mrs. Maisel” do attest to the platform’s success. Netflix users were most likely to say they preferred streaming because of the diversity of the actors represented on screen. This resonates with the company’s commitments, as the platform has sought to empower diverse creatives at all stages of production.

Interestingly, Hulu users were most likely to attribute their preference for streaming to the platform’s authenticity. This descriptor may not apply perfectly to the dystopian fantasy of “The Handmaid’s Tale,” arguably the company’s best-known original. But Hulu’s original comedies, such as “Shrill” and “Pen15,” are often celebrated for exploring realities not often featured on TV.

If streaming has shifted how we watch our favorite shows, it has also altered the way we find them. In contrast to the era of network dominance, viewers now face a daunting array of options across various platforms. Among our respondents, 39% said they heard about new shows via word of mouth. Some cultural critics suggest that the way we talk about TV may be changing: As we move into our streaming niches, so-called “blockbuster shows” may no longer present cultural common ground. Still, smash streaming hits such as “Stranger Things” indicate that word-of-mouth buzz can still fuel pop culture phenomena.

Another 19% said they learned of new programs via advertising. Ads were a particularly common source of exposure for those who primarily watched network TV – likely because networks advertise their own shows. In terms of actually picking what to watch, however, 70% said they went with genres they enjoyed already. Interesting trailers or show descriptions were other top reasons for selecting shows, whereas ads and word-of-mouth buzz were generally less convincing.

Our findings present a sweeping shift in progress, as viewers abandon the decades-only patterns of TV consumption. Streaming affords more convenience and control, and many viewers are willing to wait to enjoy their favorite shows on digital platforms.

Streaming’s appeal amounts to more than the ability to binge: In the eyes of many, streaming platforms offer superior content. If network and cable channels aim to remain relevant, they must do more than move their content online. Indeed, they must create shows worthy of devoted audiences – and compelling enough to stand out in a saturated media environment.

Of course, streaming’s rise is also fueled by the continuing improvement of our devices: As our phones, tablets, and computers grow more powerful every year, binging becomes more enjoyable. If it’s time to upgrade your gadgets, ItsWorthMore.com offers incredible deals on refurbished devices, including the latest iPhone and Android models. You can even sell us your old tech and put the money you get toward your new purchase.

Respondents ranged in age from 18 to 77 with an average age of 37.6 and a standard deviation of 12.2. 120 respondents were baby boomers, 277 were Gen Xers, 35 were from Generation Z, three belonged to the silent generation, and 545 were millennials. Forty percent of respondents identified as men, and 60% identified as women.

To calculate the money potentially lost by viewers turning from TV networks to streaming platforms, we used 2018 ad prices for 30-second ads in each of the shows. We then calculated the percentage of TV viewers lost by analyzing our survey results for viewers who had started each show on TV but said they would watch the newest season on a streaming platform. To calculate the potential money lost per episode, we used the ratio of advertisements and the actual run time of each show. For the money lost per season, we used the average run time per episode and the average number of episodes per season.

Our data rely on self-reporting by the respondents and are merely explanatory. No statistical testing was performed. The data are not weighted.

Do you want to share these findings on the ever-changing dynamic between TV and streaming platforms? The graphics and information found on this website are available for noncommercial reuse. Feel free to share them as much as you’d like across the web, on social media, and at the office, but please make sure to link back to this page. Thank you!