Hundreds of devices, thousands of social media sites, and millions of people within reach. Technology has infiltrated every aspect of our lives, completely changing the way we prepare to eat a meal (snapping a picture comes first), how we meet people, and even the way we manage our money. Technology has brought people together from opposite sides of the world, but for those who are already together, technology can also tear them apart.

Passwords and fingerprints provide much-needed privacy, especially from strangers, but does the worry of others accessing personal information carry over into romantic relationships? We surveyed nearly 1,000 people for their relationship details and how technology factors into it. Do shared passwords increase satisfaction, or is privacy the real testament to trust? Keep reading to see how trust and technology intertwine. 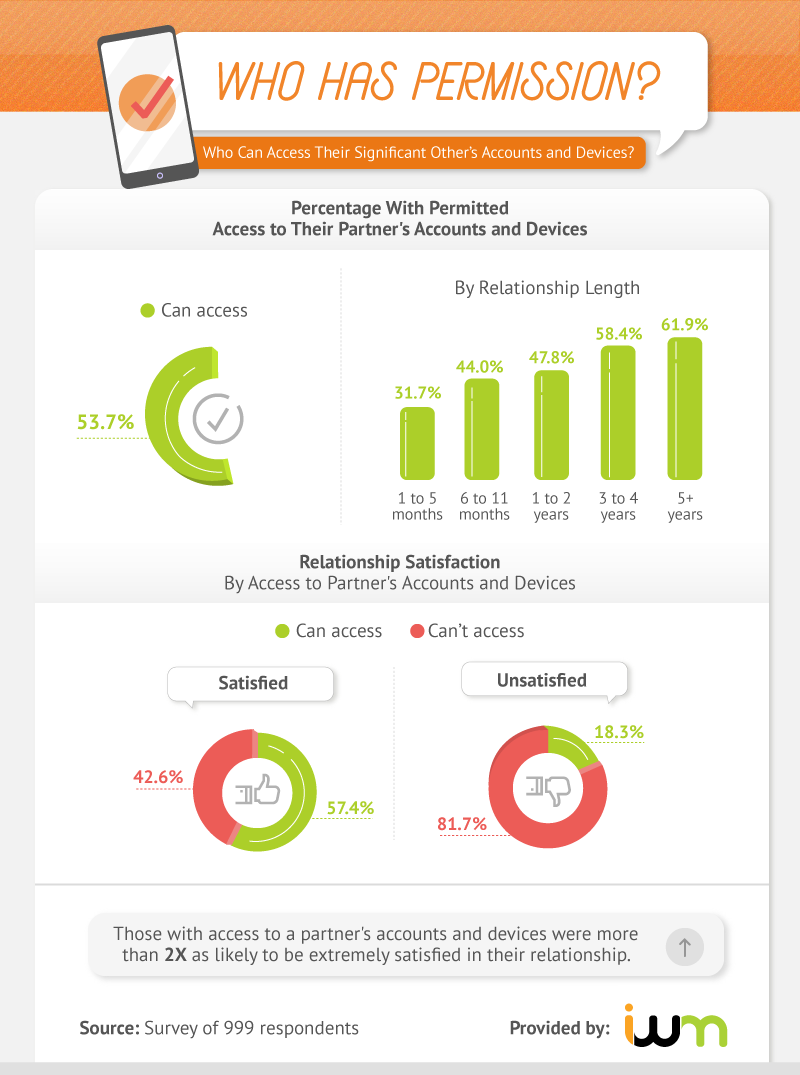 Sharing passwords has become the ultimate sign of trust – after all, the majority of our lives are online, and everything from conversations and personal notes to photos and videos live inside the devices that fit snug in our hands. But this leaves questions about the trustworthiness of those who prefer to keep private things, well, private.

Some people are comfortable sharing passwords, while others find it completely unnecessary. According to our study, 53.7% of people were granted access to their significant other’s accounts and devices. However, for the other 46.3%, it may not necessarily be a sign of distrust. In fact, it could just be too early in the relationship. Our study found that as the length of the relationship increased, so too did the percentage of people with permission to access their partner’s accounts and devices. Compared to just 31.7% of people with access after dating for one to five months, nearly 62% of people had access after dating for five or more years. 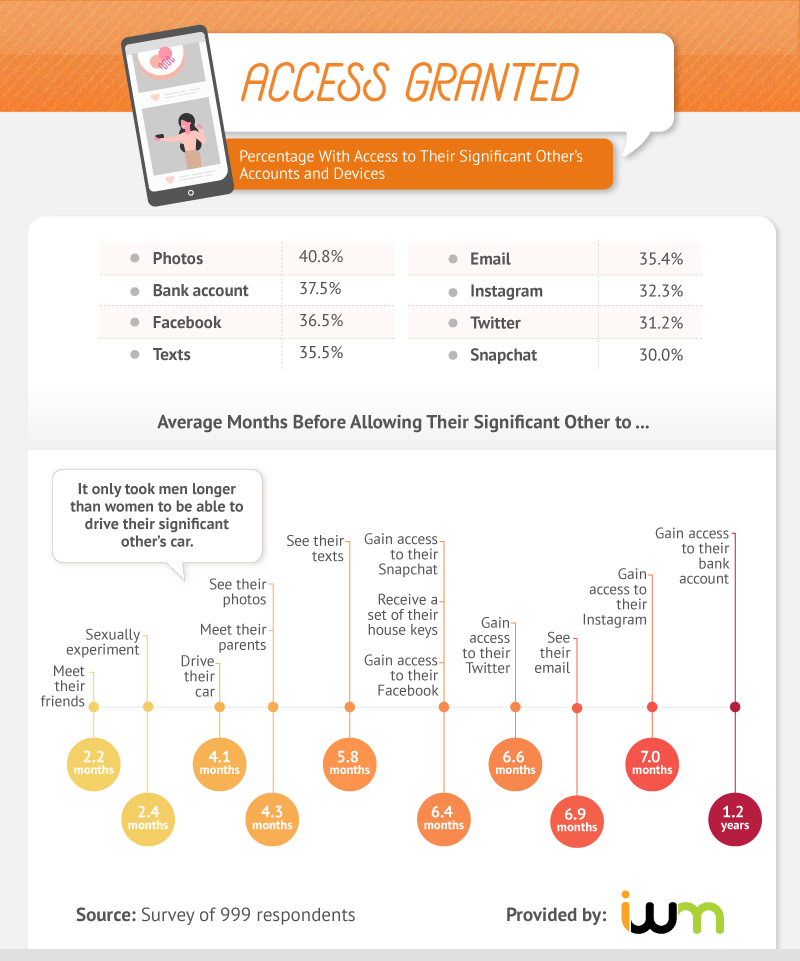 Sharing access to accounts and devices goes further than texts and direct messages. Bank accounts, emails, and even digital photo albums were shared between partners, for which the latter was most granted access. Almost 41% of respondents reported having access to their partner’s photos, while 37.5% had access to their bank account.

Merging finances has traditionally been a sign of commitment and a step on the road to marriage, but millennials are changing the game. Along with creating new marriage trends, younger adults are continuing to keep their finances separate, even after tying the knot. Even with generational changes, 76% of couples shared at least one bank account in 2016.

While every relationship is different, couples tend to follow similar timelines. However, some take longer than others, and others veer completely from the path. But when it comes to sharing passwords and access to accounts, it took couples an average of 4.3 months before allowing their partner to see their photos. Once the six-month mark rolled around, people began sharing house keys and giving access to Facebook, Snapchat, and Twitter. Bank accounts were, by far, the most protected, with people holding onto their privacy until around 1.2 years 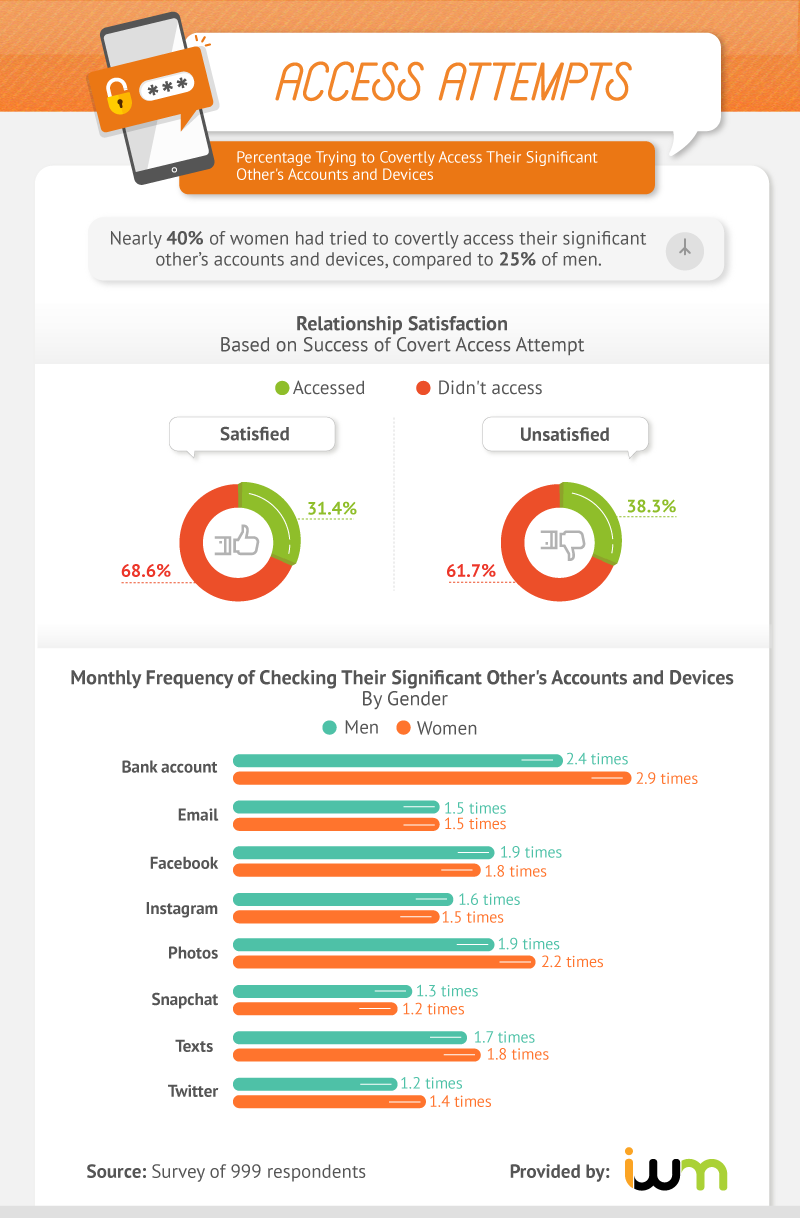 Fingerprint and face-scanning systems on our devices may seem like boosted security, but when the owner of the phone is sleeping within reach, it can be pretty easy to gain access without their permission. Women were significantly more likely than men to try to gain access discreetly to their significant other’s accounts and devices (40% versus 25%).

Snooping behind your partner’s back may not be a sign of a completely unsatisfying relationship, though. People who were unsatisfied in their relationship were only slightly more likely to gain access without permission, with 38.1% having a successful attempt, compared to 31.4% of those satisfied in their relationship. Regardless of reported satisfaction, succumbing to the temptation to snoop is likely a sign of underlying problems.

That begs the question: How often do people check their partner’s accounts when permission isn’t granted? Not as often as you think. Both men and women checked their partner’s bank account the most each month, with women checking an average of 2.9 times and men checking an average of 2.4 times. Women were also more likely to check their partner’s photos, averaging 2.2 times per month. On the other hand, men were more concerned about social media, checking their significant other’s Snapchat, Instagram, and Facebook more than their female counterparts. 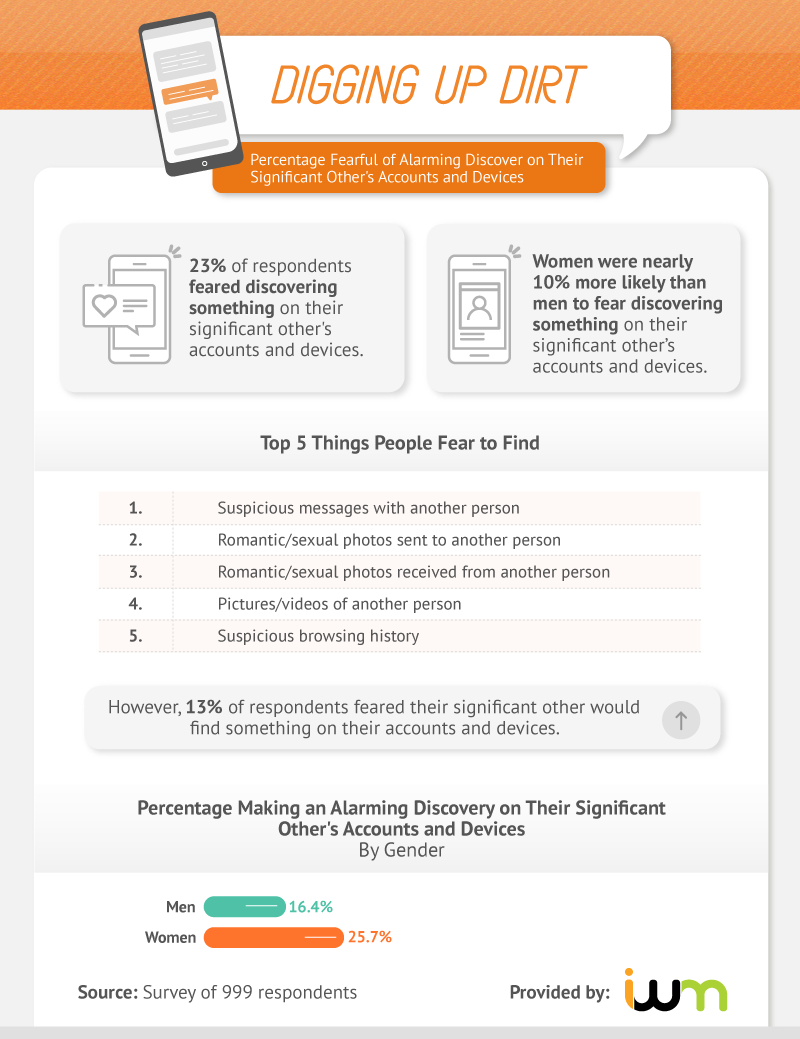 There is a certain level of anxiety in relationships that is considered normal. However, when it came to checking a partner’s accounts and devices, 23% of people feared to find something suspicious or alarming. The most feared finding was suspicious messages with another person, followed by romantic or sexual photos sent to another person.

The fear of finding something isn’t always one-sided, though. Thirteen percent of respondents also reported being afraid that their significant other would find something on their accounts and devices. In fact, 25.7% of women and 16.4% of men made an alarming discovery while checking their partner’s accounts. 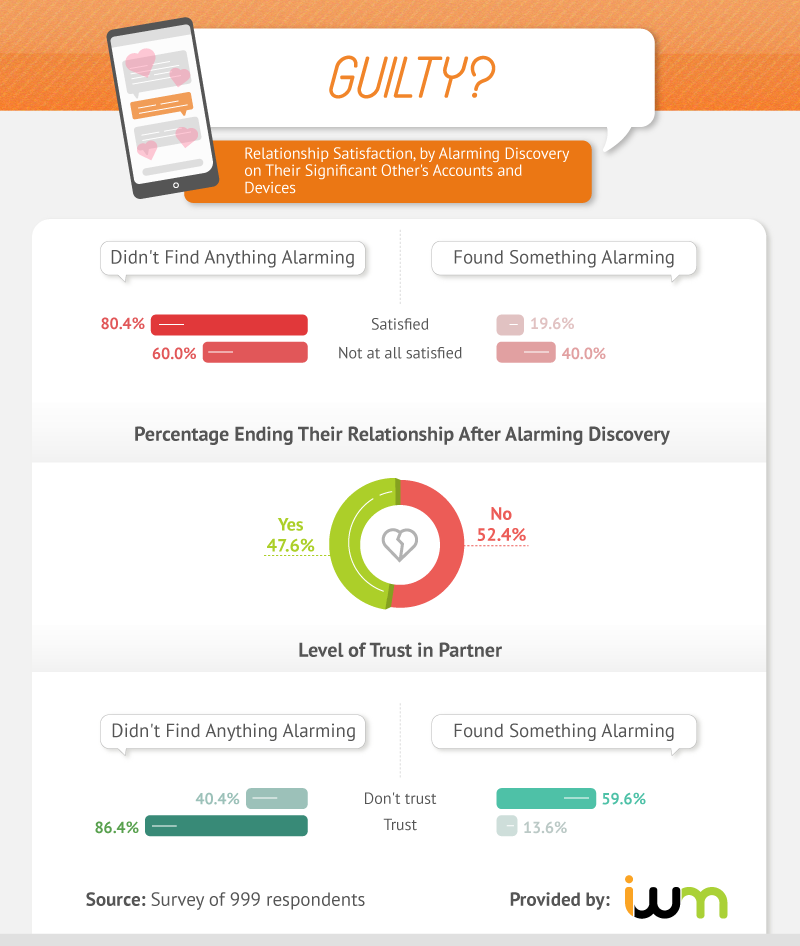 Regardless of satisfaction and trust, the alarming things found on a partner’s accounts and devices don’t necessarily mean a breakup is coming. Over 52% of people didn’t end their relationship after the discovery. Even if the discovery is infidelity-related, many people choose to stand by their partner and take steps to better their relationship. Honest and open communication, and perhaps agreed-upon checkups, can turn the situation around.

Out With the Old, In With the New

Technology often gets a bad rap for ruining relationships. Experts say heads are more often turned toward screens, and real-life conversations are dying. But the barriers technology brings between people aren’t only regarding attention. While every relationship is different, access to accounts is bound to come up in a conversation at some point. Whether it’s about wanting to see a partner’s pictures or gaining access to his or her bank accounts, technology is a part of building relationships.

But when trust disappears and insecurities rise, people may go behind their partner’s back to check up on them. Regardless of the reason for snooping, it’s clear that passwords and biometric authentication don’t perfectly protect privacy. Privacy breaches may be a sign that it’s time to say goodbye to a relationship or hello to new technology. At ItsWorthMore.com, we can help you get rid of your old technology to make room for the new. Easily search for your used electronics and get an instant quote based on the condition. We’ll provide you with free, trackable shipping, and within just two days, cash will be in your hands. To learn more, visit us online today.

The data we are presenting are self-reported. There are many issues with self-reported data. These issues include but are not limited to selective memory, telescoping, attribution, and exaggeration especially when respondents are being asked about their current or past relationships.  As a result, the outliers in this study have been excluded.

No relationship is the same, especially when it comes to sharing sensitive information. Would you help us by sharing this content with your friends and followers? If you do, please link back to this page so that others can explore all our findings. We also request that you use our information and images only for noncommercial purposes.