Technology and the workplace have become completely inseparable over the last few decades. Computers, smartphones, emails, and online chats are the bedrock of business communication in the modern age – and along with rapid technological developments comes a completely new set of rules and etiquette.

The relationship between employees and devices is all about balance and self-awareness: When addressing other people, keep your phone out of sight. Make sure your ring tone is silenced during meetings. Respect the rules that are intended to curb the use of technology when it’s not appropriate.

Understanding these etiquette guidelines is one thing, but respecting them requires an immense degree of self-control, especially in an age of documented phone addiction. We asked over 1,000 full-time employees about their tech habits in the workplace, from gossiping over their company’s internal chat messenger to their stance on phone use during an active face-to-face conversation. Let’s dive into their responses.

Technology has turned the occasional water cooler catch-up into an all-day chat marathon. With no shortage of workplace-facing apps that aim to facilitate and streamline employee communications, spending time talking to co-workers is no longer viewed as a productivity killer: Instead, it’s often a core element of the productivity cycle. 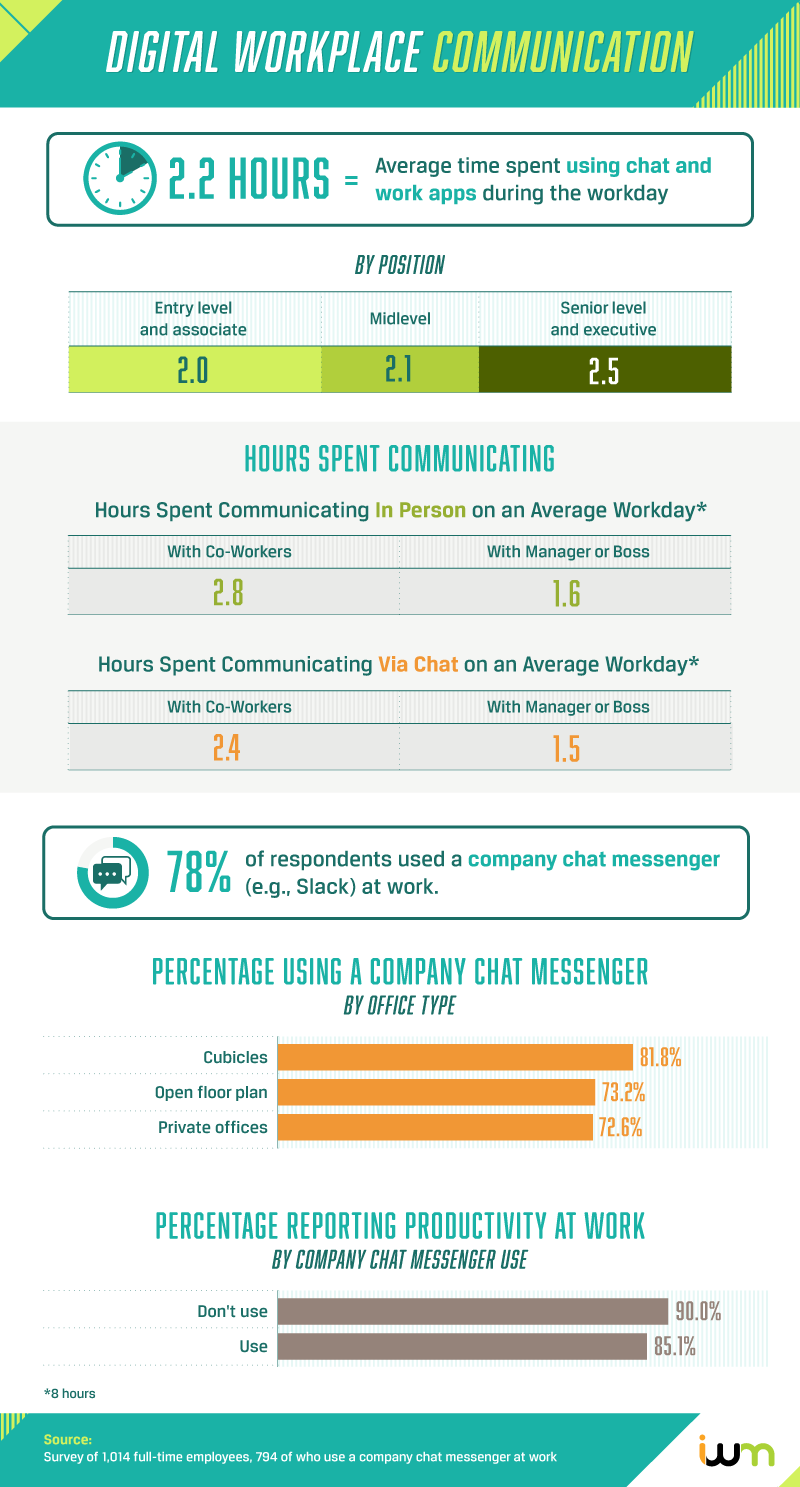 While employees who made use of their company’s instant messenger reported being slightly less productive than those who abstained, the difference was negligible, and the majority of both groups self-reported as being generally productive.

Even in the digital age, our respondents kept the art of face-to-face conversation alive: On average, people spent slightly more time speaking to their colleagues in person than they did online each day (2.8 hours chatting with colleagues face to face, and 2.4 hours via chat). The trend was the same when it came to speaking with bosses, at 1.6 in-person hours per day versus 1.5 online hours.

If you look at the news, it might seem like face-to-face interaction is going the way of the dodo: For example, less than a third of teenagers prefer to communicate with their friends in person as opposed to texting or through social media. 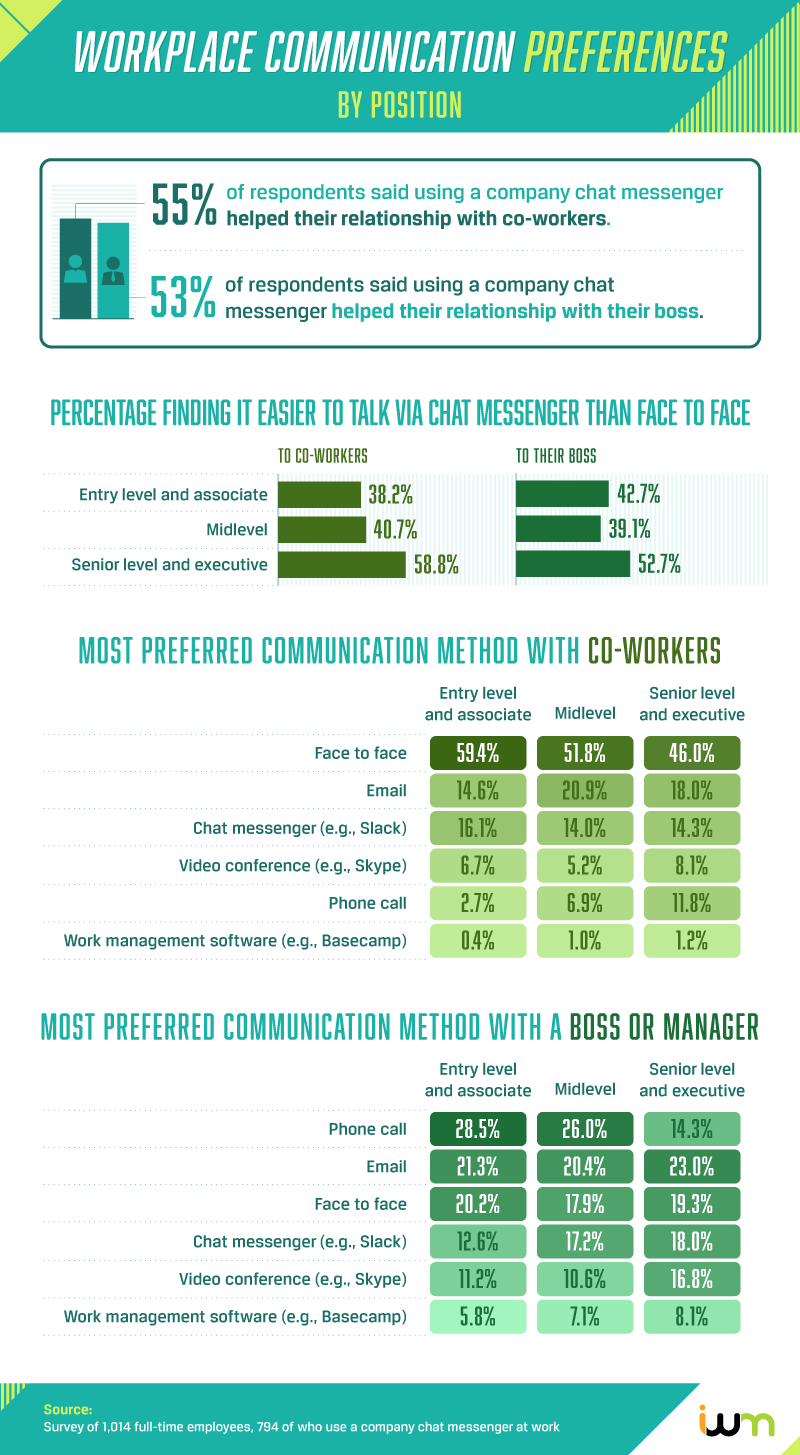 However, our survey revealed that it was actually senior- and executive-level respondents who found it easier to use their company’s online chat to communicate with co-workers than the potentially younger entry-level employees. Executives were also most likely to find online messaging easier for interactions with a boss.

While the majority of each type of employee (entry level, midlevel, and executive) listed face-to-face conversation as their preferred way of interacting with co-workers, things were more nuanced regarding boss-related conversations. Senior-level workers listed email as their preferred medium, while entry-level and midlevel employees would rather use a phone.

More than anything, our respondents seemed to view online communication as a connector and facilitator: More than half said using the company chat helped them build a relationship with their co-workers and bosses.

Our respondents were a productive bunch while using their office chat service: Nearly 90% said they used it to discuss work tasks with their colleagues, followed very distantly by roughly 21% who used it to gossip. Lower-level employees discussed work topics significantly more frequently than executives, with the latter group reporting higher instances of sharing sensitive company information, complaining about co-workers, and gossiping via chat. 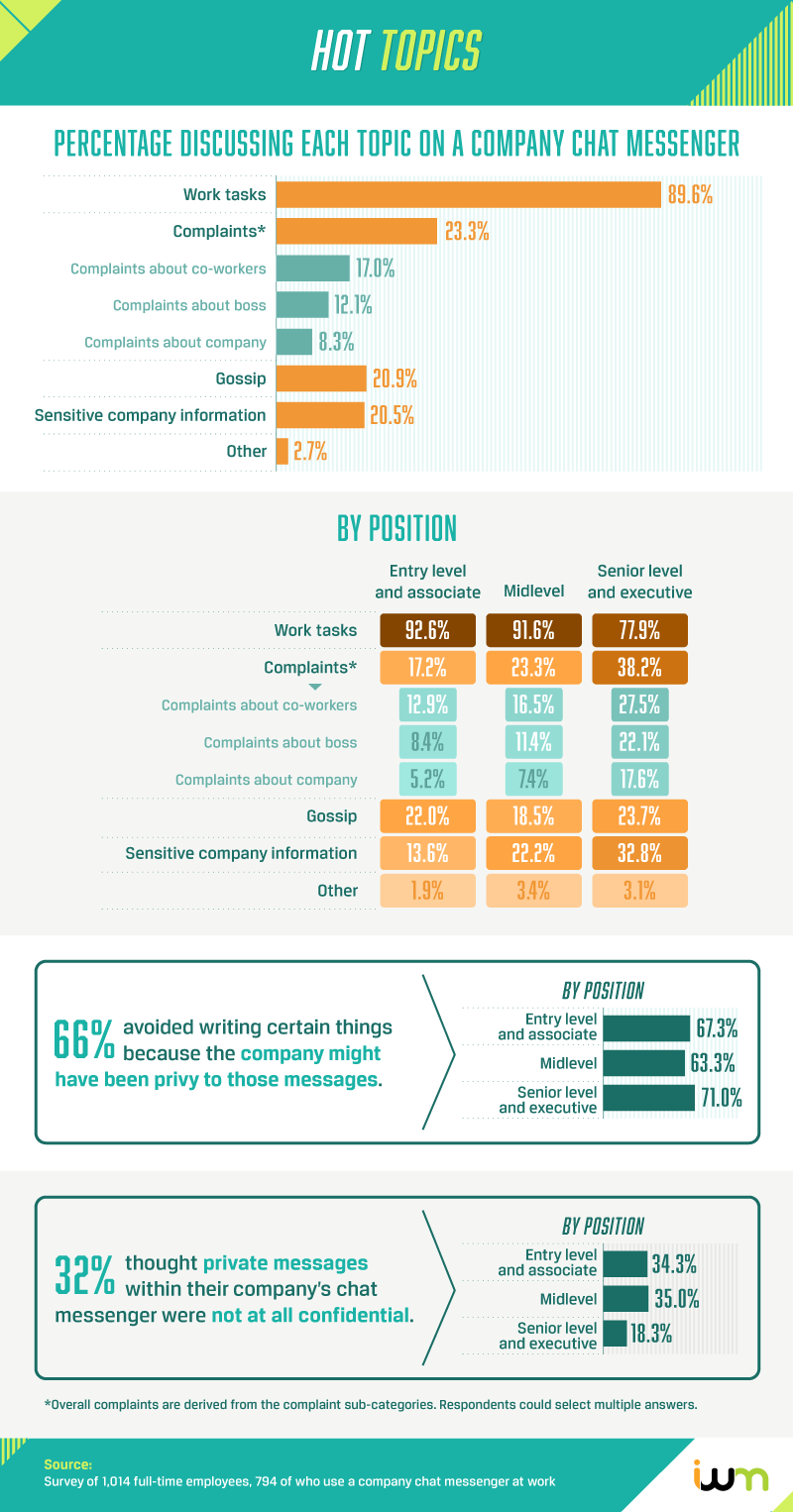 The majority of respondents (83%) abstained from complaints or discussing office rumors on their company messenger, which may be attributable, in part, to genuine doubts over the privacy of company chats. Almost a third of those surveyed expressed a belief that their chats were “not at all confidential”. Given that they would seem to be the beneficiaries of a chat-snooping policy, it is interesting to note that only 18.3% of senior level and executive employees admitted to sharing that suspicion.

It’s important to remember that spreading gossip is more than just cathartic chatter between co-workers: It can erode trust and morale, slash productivity, and stir up anxiety, among other things. Think before you type!

That being said, the latter group might be prone to decreased productivity either way: As counterintuitive as it might sound, the concept of breaking down physical barriers in the workplace has actually been found to hurt productivity and collaboration. One Harvard study found that open-concept offices led to a marked decrease in face-to-face interactions coupled with an increase in email activity. 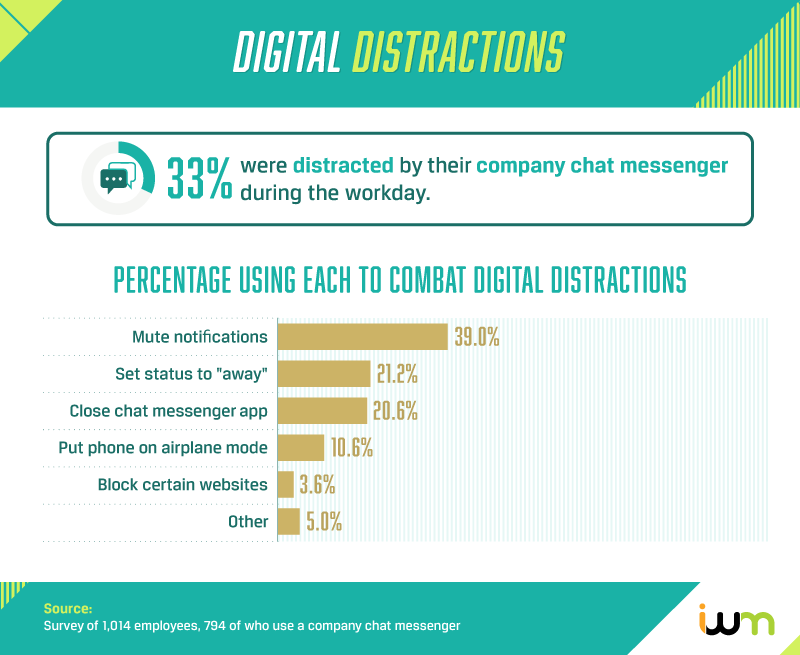 For those who feel like their company chat affects their work, there are ways to combat the distraction. Thirty-nine percent of respondents opted to mute their notifications, over 21% set their status to “away,” and close to another 21% closed their messenger app altogether to focus on their work.

It’s a near-universal pet peeve: 94% said they felt annoyed when the person they were talking to was distracted by an app or digital device. No matter how many people dislike it, though, this behavior is so common that it’s actually earned itself a nickname: sidebarring. One study conducted by Facebook found that 71% of people had been guilty of this offense at one point or another. 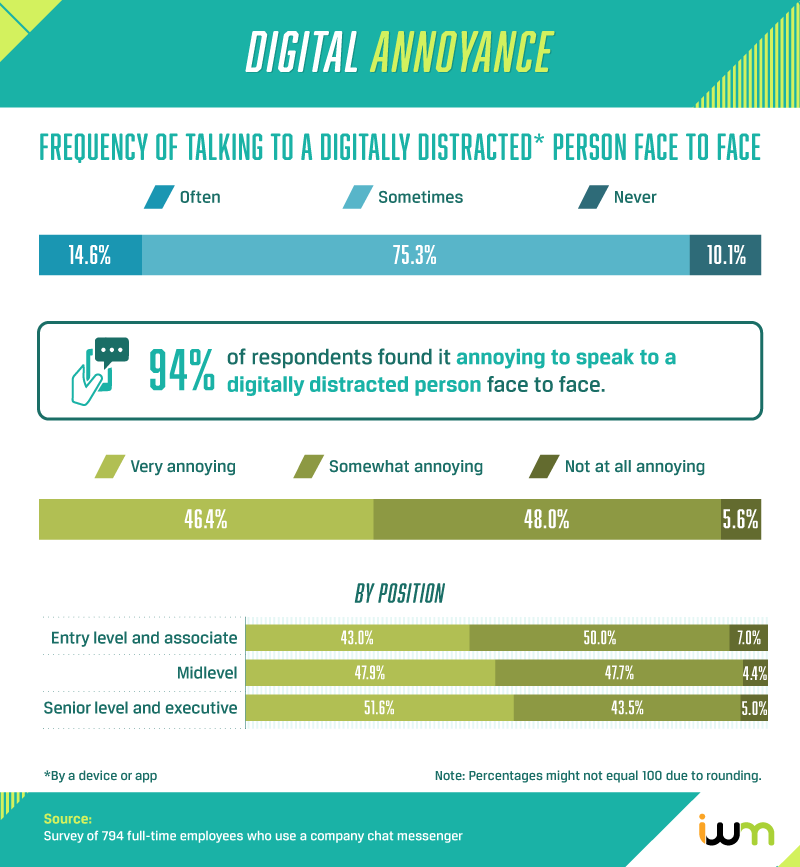 Our data revealed numbers similar to the Facebook study when it came to the prevalence of digital distraction. More than three-quarters of respondents said they experienced conversations that involved device or app distractions “sometimes,” and another near 15% said it happened “often.” Just a touch over 10% said they had never been a victim of the dreaded sidebarring.

Next time you find yourself reaching for your phone during a conversation, remember that the consequences of digital distraction are twofold: Not only does it make your conversation partner feel neglected, but staying hyper-connected to people other than the ones in front of you might actually be bad for your mental health as well.

“This could have been an email!” On top of the concessions made in time, money, and efficiency each year, frivolous meetings are often a productivity-killer as well: According to our survey, 81% of employees confess to having worked on other work-related tasks during a meeting instead of paying attention. Executives were the most likely tier of employee to do so at almost 88%, followed by midlevel workers (83%) and entry-level employees (close to 77%). 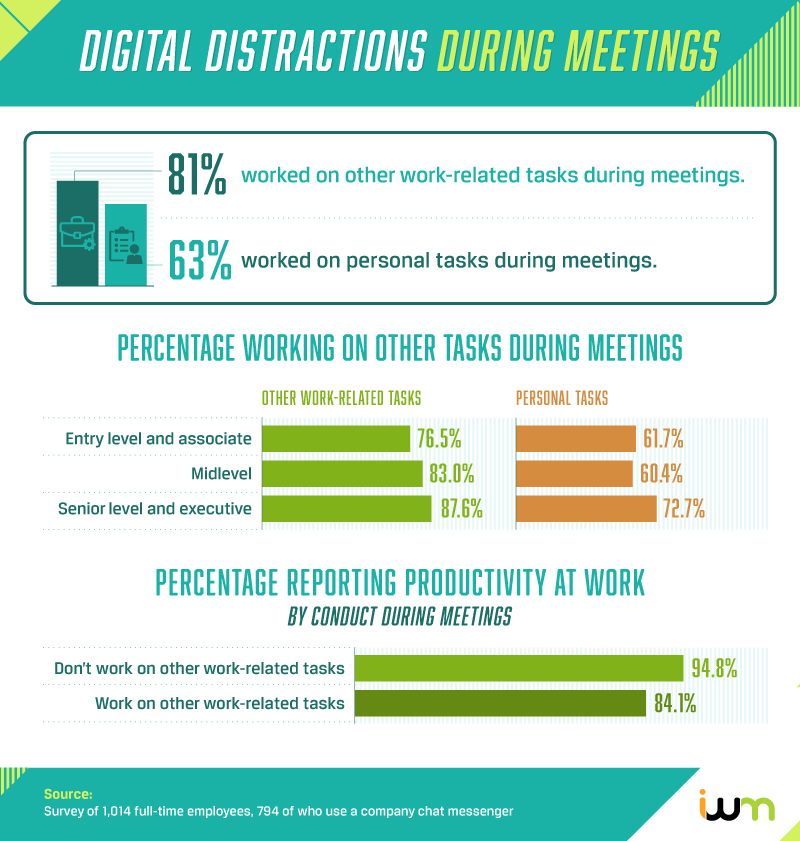 While handling other work during a meeting might seem irresponsible, another 63% admitted they had turned their attention to personal tasks during a workplace roundtable. Once again, senior-level employees were the guiltiest of this transgression. And although 32% of respondents said their workplace enforced a “no computer” or “no phone” rule for certain events, just 17% had been called out in a meeting for using a device when they weren’t supposed to.

Not every meeting can be a slam dunk, but certain foundational elements can promote success: Carving out an agenda, starting and ending on time, and finishing up the discussion with an action plan are three great ways to keep employees on the ball, engaged, and motivated during a meeting.

No matter the prevalence of digital communication in the workplace, our respondents still reported marginally higher rates of face-to-face interaction with their colleagues and bosses. When it came to chatting online, though, more than half said their company messenger helped bring them closer to those same people.

More than anything else, people discussed work-related subjects using their workplace messaging service – but there was room for a little gossip and blowing off steam as well. There’s a time and place for everything, though: Almost everyone said they found it frustrating when someone was distracted by their device during a conversation.

So is it time to put your phone down? If you’re saying goodbye to your device for good, why not trade it in for cash? With It’s Worth More, you can give in your used phone, laptop, or tablet and receive money in return. The process is quick and easy, and IWM is backed by over 2,000 five-star ratings. Visit Itsworthmore.com to get the best possible offer for your used electronics.

For this project, we surveyed 1,014 full-time employees on their experiences with workplace productivity apps and digital communication in the workplace. 794 of the respondents reported using a company chat messenger at work. Of the 1,014 employees, 446 held an entry-level or associate position, 407 were midlevel, and 161 held a senior-level or executive position. 358 respondents worked in private offices, 313 in offices with an open floor plan, and 231 in offices with cubicles. 112 respondents worked in other work environments or remotely.

Forty-eight percent of respondents identified as women and 52% as men. Respondents ranged in age from 19 to 67 with an average age of 35 and a standard deviation of 9.7. Outliers were excluded when determining the average hours of communication.

Our data rely on self-reporting by the respondents. No statistical testing was performed. It is possible, with a greater sample, that our data would be more representative of the American public.

Do you want to share these findings on communication in the digital workplace? The graphics and information found on this website are available for noncommercial reuse. Feel free to share them as much as you’d like across the web, on social media, and at the office, but please make sure to link back to this page. Thank you!