The Worldwide Developers Conference (WWDC) commences on June 3, 2019, and anticipation is already starting to swell around potential developments in the Apple world. Apple isn’t the only company that delivers keynote speeches, though.

We examined Apple keynote speeches and compared them with other tech giants, like Microsoft, Google, Facebook, and Samsung. We analyzed different aspects of keynote speeches and looked into trends that could shine light on the hype resulting from each brand’s presentations. Keep reading to see what we learned.

Speeches by the Numbers 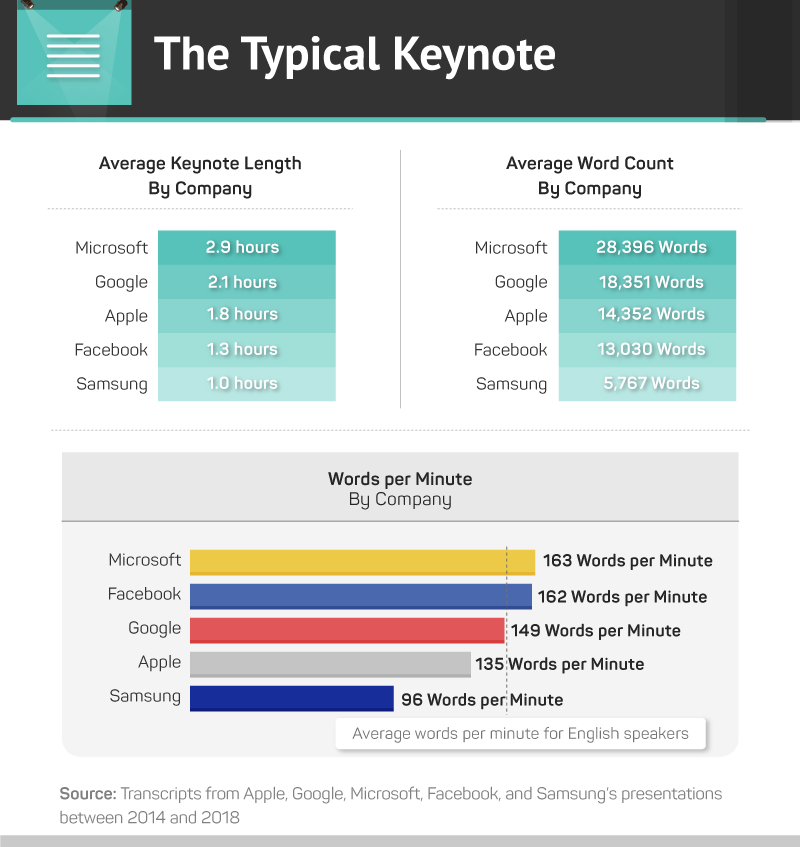 We looked at the keynote speeches of five major tech companies over the last five years and analyzed various components, such as the length of the speeches, word count, and the percentage of words that were adjectives. Microsoft came out on top in several categories – it had the longest average keynote speech at 2.9 hours, the greatest word count at over 28,300, and even a rate of delivery of 163 words per minute.

Samsung, on the other hand, had the shortest average keynote speech with an hour and the smallest word count at a little over 5,700 words. It also had the least words per minute.

Finally, Apple came in the middle with average speeches lasting 1.8 hours and containing around 14,300 words. When it came to words per minute, Apple sat at 135. 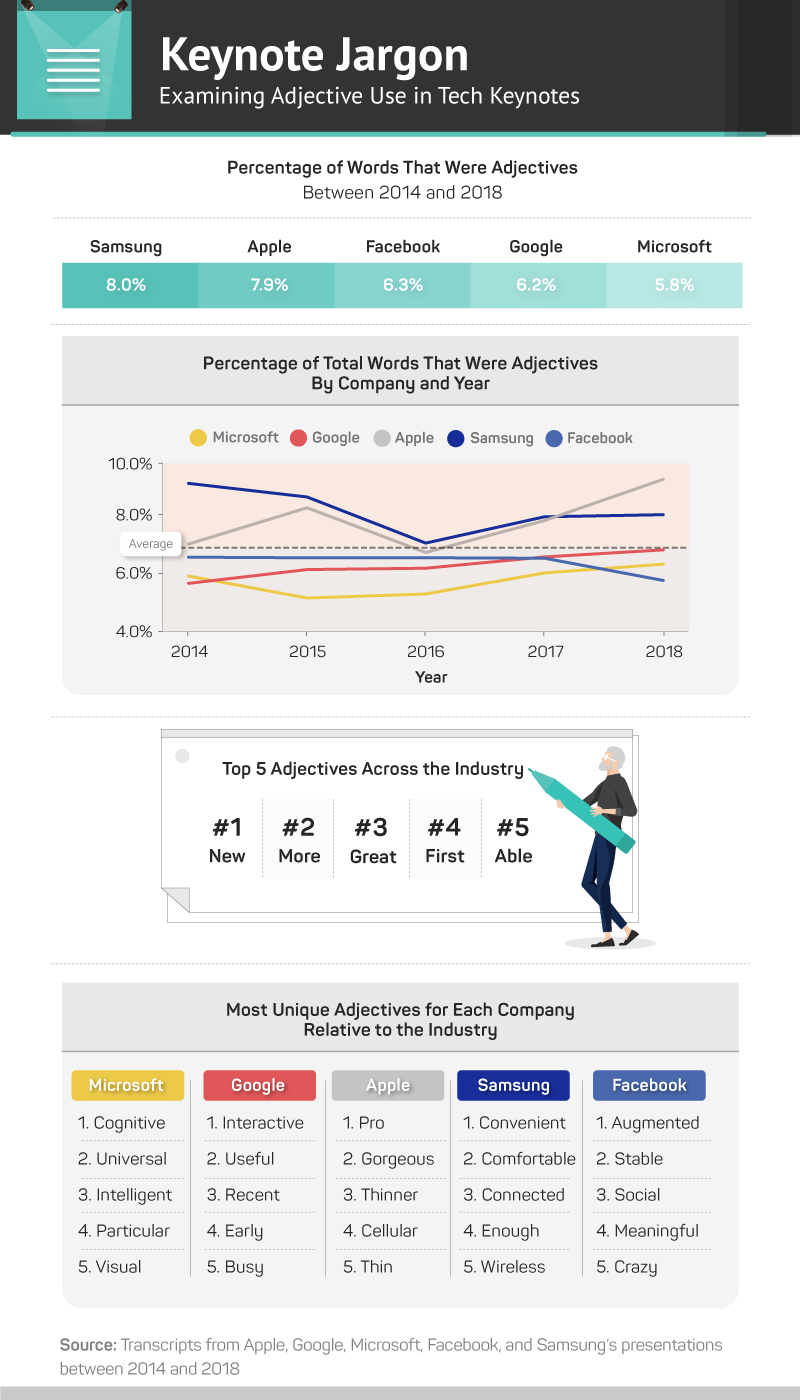 We also looked at the number of adjectives used in each keynote speech. Samsung, despite having the lowest average speech time and word count, really loaded its announcements with adjectives with 8% of its total words being classified as such – just in front of Apple at 7.9%. Over the last five years, Apple increased its adjective use overall, while Samsung saw a slight decline.

The most used adjective? “New,” which may relate to keynote speeches revealing new products, software, or other developments. Some adjectives were company-specific, such as Apple’s second-most used “gorgeous.” 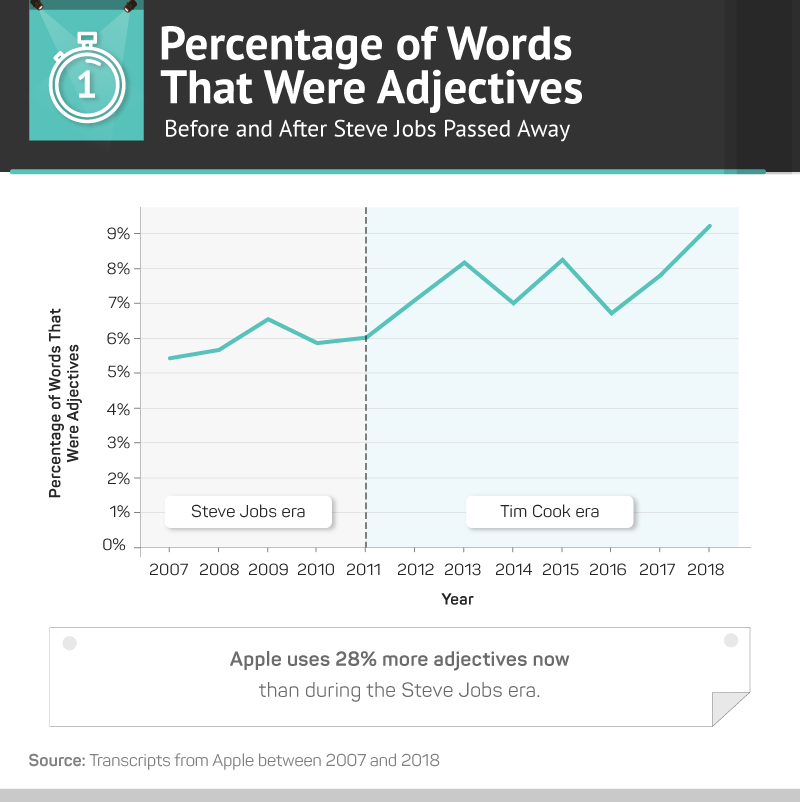 We took a closer look at Apple’s keynote speeches since 2007 and compared the use of adjectives during Steve Jobs' reign and the Tim Cook era. Jobs, one of the co-founders of Apple, passed away in 2011. He was well-known not only for the company he helped start but also for his keynote speeches to help launch new Apple products.

After his death, those duties fell to Tim Cook, current CEO of Apple. His keynote speeches have steadily bumped up the adjective count by quite a bit – he uses around 28% more adjectives than Jobs.

In 2011, the first event took place during the Tim Cook era with a slight decrease in adjective use, but usage eventually increased to more than 9% by 2018. 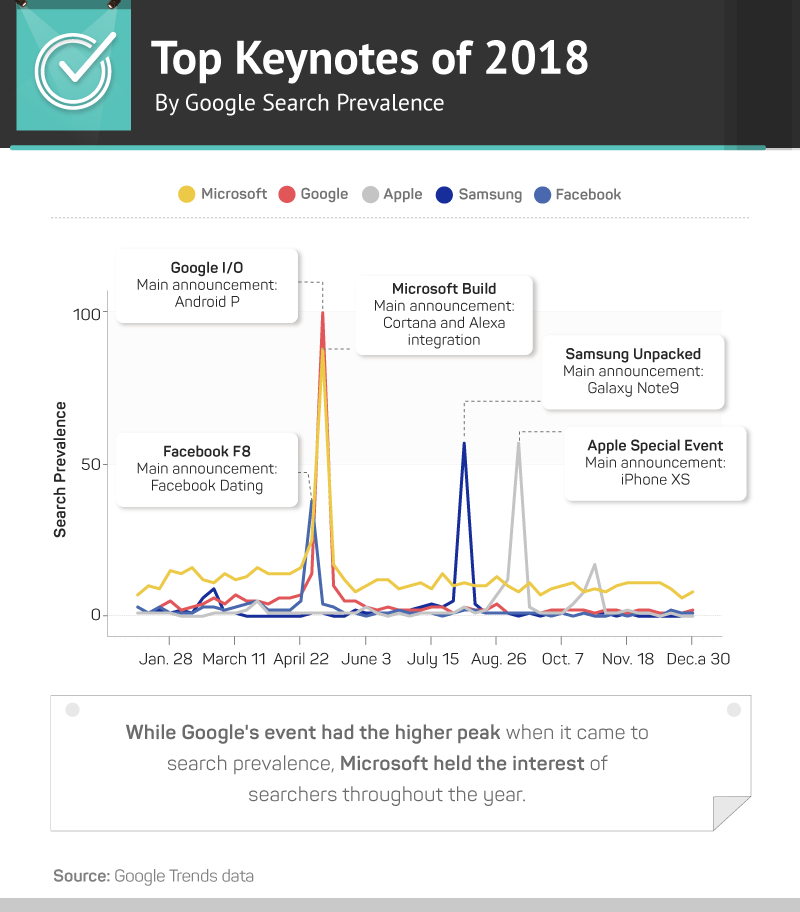 Several big keynotes took place in 2018. We looked at which events gathered the most interest via Google search prevalence and found a few surges as the year progressed.

There was a significant surge in search prevalence during late April at Facebook F8, where the company introduced Facebook Dating. However, that climb in searches was eclipsed just a week or so later during the Google I/O and Microsoft Build events, which both took place on May 6. Google’s announcement of Android P had the biggest peak in searches, while Microsoft announced Cortana and Alexa integration to a tad bit less fanfare (at least according to Google search prevalence).

There were a few other notable crests in interest, including the Galaxy Note9 announcement at Samsung Galaxy Unpacked in August and the iPhone XS announcement in September at the Apple Special Event.

While Google had the highest single peak overall, it was Microsoft that held the interest of internet searchers throughout the year. 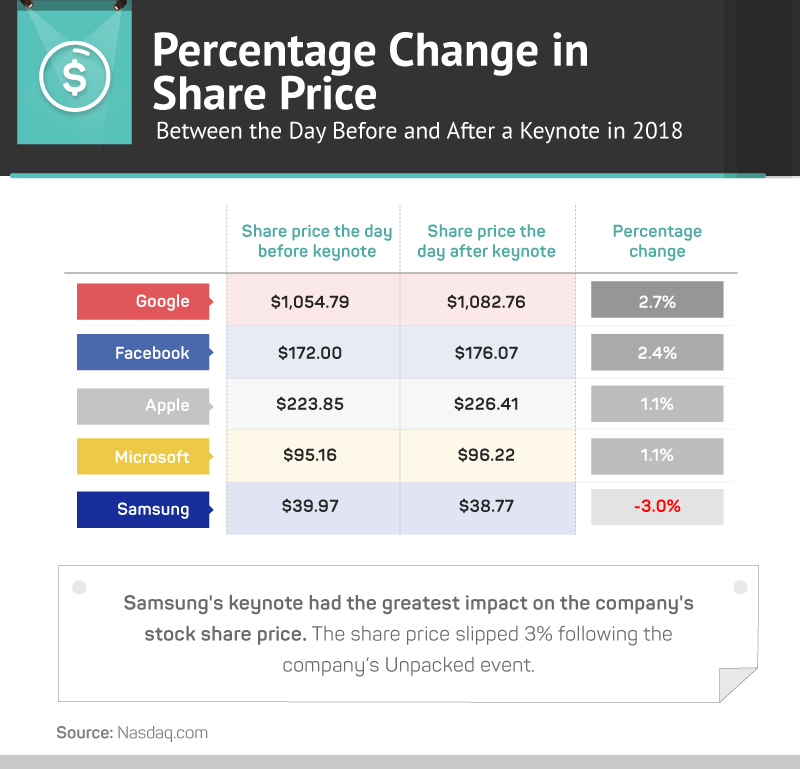 Special events and keynote speeches sometimes have a distinct impact on stock share prices directly following an event. For four of the five companies examined, the share prices showed an increase after their big events. Google, for example, had a 2.7% boost in share price after its 2018 announcement, while Facebook was just a tad under at 2.4%.

Apple and Microsoft didn’t enjoy a huge bump in stock prices (just 1.1% each), but they also didn’t experience a drop in price like Samsung – after its Unpacked event, Samsung’s share price dropped 3%, going from $39.97 per share to $38.77. 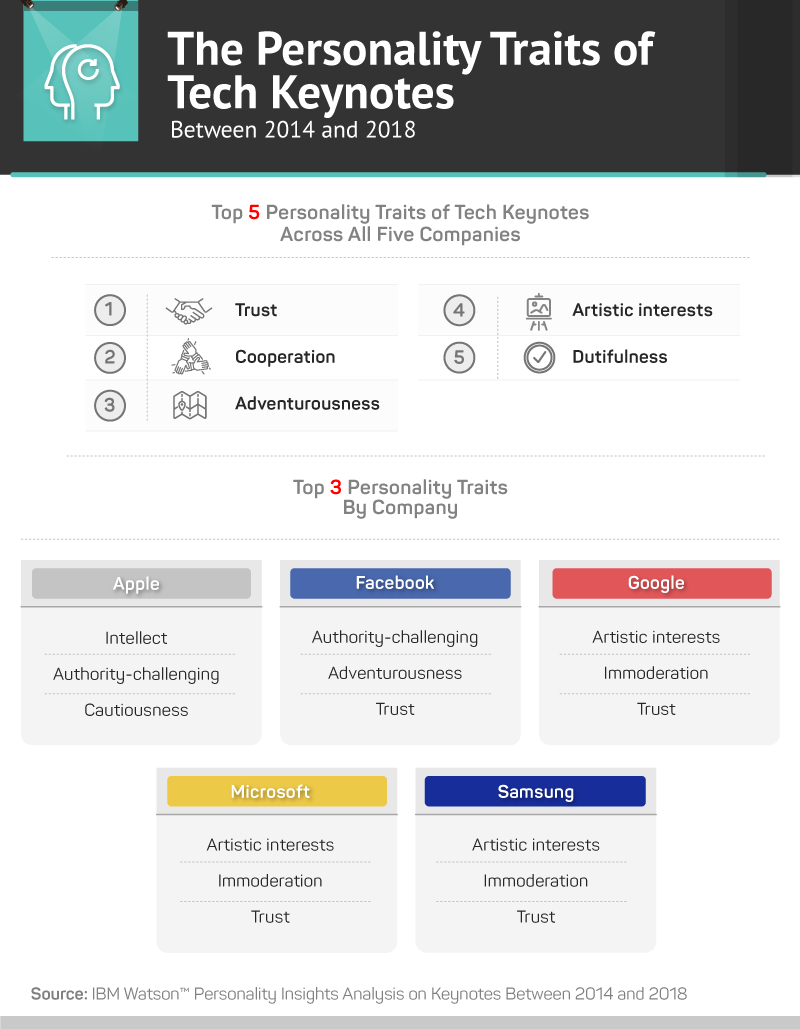 Tech announcements, like any other presentation, can convey personality traits. Many of us are familiar with public speaking. Informative speeches seek to tell the listener about people, events, places, or things. Special occasion speeches are those that memorialize or honor a person, event, place, or idea.

Persuasive speeches are the most common type of speech, though. These speeches have a goal – in the case of tech announcements, these companies want the audience to learn more about and, ultimately, purchase their products.

We analyzed the keynote speeches of five tech giants and found they shared these traits: trust, cooperation, adventurousness, artistic interests, and dutifulness.

Interestingly, Apple’s No. 1 personality trait was intellect, which didn’t make an appearance among the other companies.

Bring on the Keynote Speeches

There really isn’t anything like the buzz of an approaching tech event, complete with announcements in the form of keynote speeches. These events are often looked forward to by those in the industry and people who enjoy keeping up on the latest developments in the tech world. We thought it would be compelling to comb through these speeches to show how similar and different tech companies are when it comes to their keynotes speeches. What’s the next big thing? We’ll have to wait for the next event to find out.

Transcripts for the speeches come from closed captioning on the YouTube videos of each. The events were for Apple’s Special Event in September.

To find adjectives, we performed text analysis using Python to strip away all words besides adjectives. Adjective counts were totaled for each event and were divided by the duration of each speech in minutes to calculate adjectives per minute.

To determine the personality traits of each speech, we fed the speeches to the IBM Watson™ Personality Insights API, and it returned the top overall personality characteristics for each company.

The average rate of speech comes from the National Center for Voice and Speech.

Tech companies are known not only for their eccentric presentations – but they are also known for the eccentric language they use to announce them. Were you astounded by our findings? Perhaps your readers would be dazzled too. Share our analysis; all we ask is that it be for noncommercial purposes and that you link back to our study.